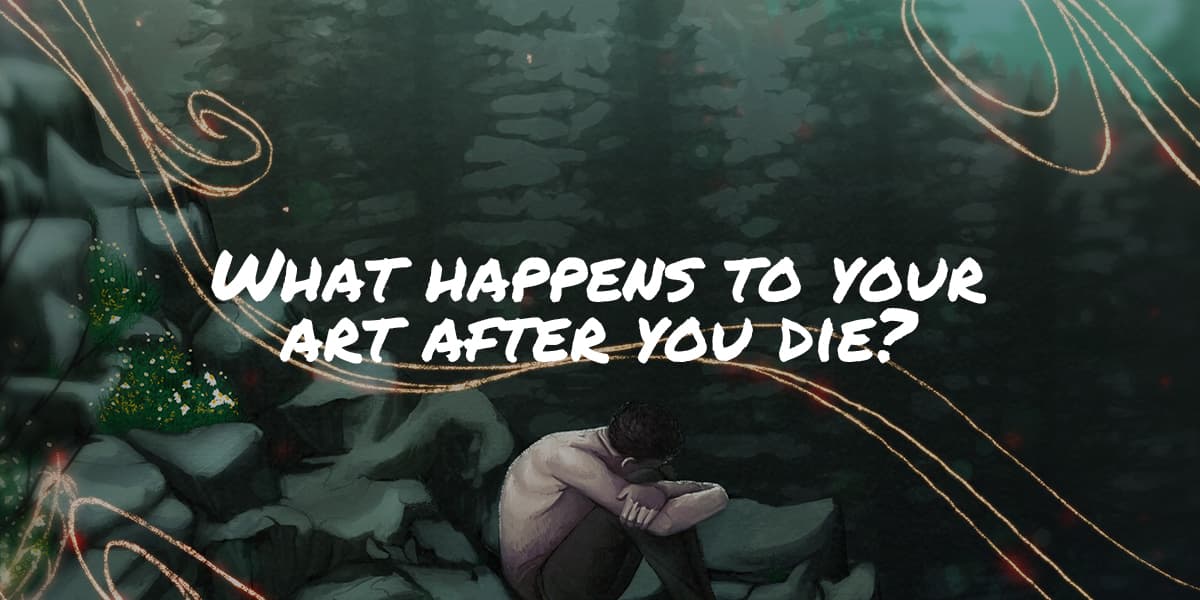 As artists, it’s easy to simply know that your artwork will, oftentimes, outlive you, and part of your legacy on the world can be quantified through your artistic journey and the creations you made (and possibly even the impact you had on the art world) while you were alive. But not all of us can aspire to the fame and notoriety that many artists climb to. Many artists are happy enough creating, and though they’d love to sell a few works to someone who may permanently collect them, they don’t put much thought into ways to leave a permanent artistic legacy behind – why would you?

It is a sad reality that many artists, especially those that are creating traditionally, end up lost and forgotten. The amount of artists and musicians who never have their artwork appreciated when they are alive is too many; often our works end up in the dreaded thrift shop or, even worse, a landfill.

Something to outlive us: using archival safe methods

A few times, I have approached projects with this specific thought in mind – will this particular work outlive me? Many artists create works that aren’t archival-friendly, and may break down or fall apart over time. It’s important that traditional media artists research how to properly create works that will stand the test of time including using archival safe methods like proper canvas, stretching techniques, preparation materials, matting, tape, and non-browning protectants.

Sure, resin-coating a painting can give you a glass-like surface that anyone would adore, but how long will that resin remain crystal clear? A year? Five years? What happens after the resin yellows, and the resin coating cannot be removed or retouched to restore the work to its original luster?

The specifics of archival safe methods all depend on the media you are using. Watercolorists have to look after lightfastness and paper contents (possibly even the water they are using to complete the works!) and oil painters need to ensure the canvas, gesso, oils, and even the varnish they choose won’t eventually damage the work. Make sure to research your specific medium so you can be most prepared. Even if your work won’t outlive you in a museum or collector’s hands, long-term collectors will appreciate a work that doesn’t fade, crack, or deteriorate over time.

There is a saying that “everything is permanent on the internet.” It’s easy to think that when your artwork has been repinned 7000+ times on Pinterest without credit to you, and chasing down the many headed dragon that is DMCA takedown on your own so you can get the recognition you deserve with credit to you. The reality is that the digital space is meaningless without the knowledge that existed before and the energy that powers it. There is no telling what the future may hold when it comes to the internet. Will the next variation of the world wide web include the backbone that is the internet as we know it today? Will all of the data currently on the web ever disappear?

We know content is lost once we stop maintaining it (mostly just when we stop paying for the hosting and domain!) so it is reasonable to assume that your website or portfolio won’t continue to exist when you no longer do. Without your website, portfolio, and social media to shout of your once existence, where else does your digital footprint lie? Perhaps you’re lucky enough to have a Wikipedia listing, or your website is preserved in the time capsule that is Archive.org. But we can’t rely on those forever, either. We can assume without the internet as we know it, our digital footprint can easily be lost forever.

When it comes to securing your digital and physical artistic legacy, it’s important to branch out into new venues that can help you preserve your memory, or even a loved one’s memory, long after you’ve left this particular plane of existence. When my painter friend Tara passed away a few years ago, I was upset to think that her paintings would not be seen by anyone else. She would never create new paintings, and she would never get to share her artistic vision with the world.

When The Sketchbook Project announced earlier this year that they had suffered a massive loss moving the project from NYC to Florida when the truck moving the entire collection lit on fire, I was devastated to know that Tara’s physical book was possibly lost. I started looking for additional avenues that we could try to preserve Tara’s artwork, beyond her still existing social profiles.

This was when I came across The Artist Lives – a digital web project dedicated to the preservation of artists and musicians that are no longer living. Here, their archives are filled with many artists and musicians who did not manage to find the commercial success to cement their legacy in the eyes of museums and galleries. Some of these artists may have never even been included in a gallery show, or had a single song. I submitted Tara for inclusion right away.

Are there more places like this where you can hope at least one will exist for an extended period of time? It’s a matter of placing many irons in the fire, I suppose.

What else can we do?

Short of leaving your artwork for someone trustworthy in a written will and hoping for the best, it’s hard to know how you can “future proof” your artistic legacy and body of works. The end goal for any artist is to become a part of a permanent art collection by an art museum that will meticulously maintain your artwork, but most of us know that is likely not a realistic goal, especially for many contemporary artists and illustrators who are using newer mediums frowned upon by the traditional art world. We also know that the museum business is a money game, and if you’re not sewn into the right circles or have the money to exist in those circles, your art is subjectively not worth it to those institutions.

It is not worth fretting yourself endlessly about leaving a permanent artistic legacy on the world. Sure, a public structural installation is likely to survive for a very long period of time given the funds that were necessary to create it – public sectors don’t want to raise money again if they don’t have to – but street art murals are likely to wear down and fade over time, only to be painted over again by another artist. Each artwork has its own lifespan, especially when it comes to traditional media, and it’s yet to be seen if any artistic impact on the world is, truly, permanent. Still, it’s good to prepare in the slightest – just in case.